This is very similar to Clone an Issue above, except that it will create a sub-task. This function could be used multiple times to create several sub-tasks, for instance if you have an issue type that requires approval by 3 groups you might create a sub-task to represent each approval, and use the "Transition parent when all subtasks are resolved" to automatically transition the parent when each sub-task has been approved.

Let’s say we use this function twice to create two sub-tasks, so that our Finance and Marketing debts can give approval: 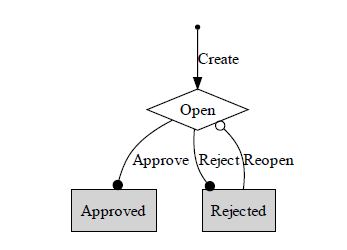 After the transition is made on the parent issue, we have the following sub-tasks:

Let’s say the information on the parent issue is not complete and Marketing reject their sub-task. Providing the two optional arguments shown are entered, the next time the parent moves through this transition then the issue will be Reopened, as opposed to another instance being created.

This is also useful for sub-tasks that represent whether an issue has passed testing in a given environment.

This post-function should be placed immediate after the function: Re-index an issue to keep indexes in sync with the database. If you don’t do this, the parent issue will not be indexed correctly.

To disable or selectively copy links, use the same method as described above in Clones an issue and links.